A plushie is laying on the floor... The plushie suddenly comes to life and you jump back in shock. Long, sharp claws emerge on its paws and twisted spikes shoot from its back in alarm, before it turns toward you and yells. YOU WAKED ME!!! YOU MEANIE!!! ME WAS....

OooOOOOOH~ You come for Lord Iaaaaaablo? He busy now...Buuuuuut IMP IS NO BUSY! Play time!!!

Before anything can be done, Imp pounces, digging into you with his claws, and knocks you to the floor.

Imp's claws are razor sharp, yet you can tell he means no harm. However, something about him isn't right...

Imp's face is now in yours and he's flashing sharp fangs, grinning at you without a care in the world.

Imp leaps off of you and races toward a wall, and you follow him...

A plushie brought to life via unknown sources, Imp is a devious guy who used to be a childhood plaything amongst the Demon Brothers. While the brothers were growing up, Imp was one of the most loved toys they had, and they would even get into fights to see who'd play with him first.

While he knows about the brothers' pasts, Imp isn't dedicated to them and would rather run around causing mischief, and never taking "no" for an answer. While he's known for breaking the rules, he's not exactly "evil", just rebellious, and would rather have fun than work all day.

However, Imp's mischief has caught the eye of two beings in particular: Iablo and Lysandre. The castle's outer walls are covered in scratches from his claws and there are pieces of torn furniture laying around from when he'd get comfy for naps. Despite this, though, Iablo can't bring himself to rid of the very being he and his brothers grew up with and loved for so many years, and can only scold the demon plush for disobeying him...Over and over again.

Fun fact: Every time he hears the term "Like nails/claws on a blackboard", he thinks it's a question and will ALWAYS ask if someone likes it (he doesn't know what the term means).

Name: Imp
Alias: Impy, The Plush, Little Devil
Race: Living Plushie
Likes: Causing mischief, running around, napping, scraping his claws against things, the sounds of his claws scraping against things, annoying people, "fish" (as in, the Bandits that try to steal the King's treasure)
Dislikes: Being scolded (even if he doesn't take it seriously), the word "no", his naps being interrupted, his fun being stopped short, Iablo and Lysandre's nagging
Personality: Immature, devious (but not "evil"), annoying, clueless, immune to extreme anger, forgetful, playful, cheery, dim-witted 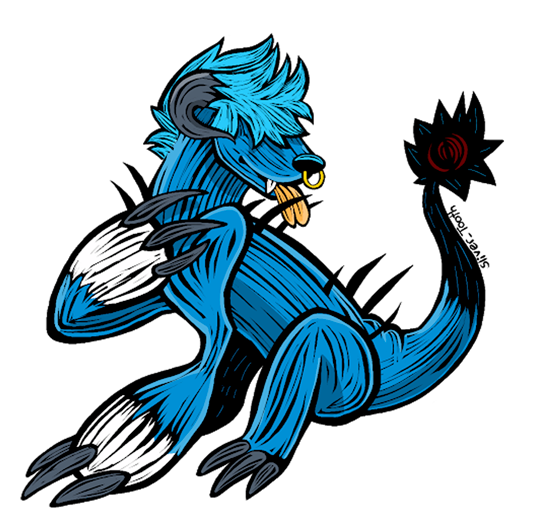 Imp's fur becomes soft material and his spikes and claws retract as he curls up and dozes off...