As the King's butler, I am greatly honored to have a place dedicated to myself.

History:
I was a part of the Royal Demon family before the Young Master was even born. I served the King and Queen of Demonius for centuries, and made sure everything they wanted was achieved. However, chaos broke out between the realms of demons and vampires, and the King and Queen had to do battle. At this time, Young Lord Iablo was a mere infant, and I was ordered to protect him at all costs.

Eventually, our realm was invaded by vampires, and I had to hide the Young Master so they couldn't find him. I then stayed with him and kept him safe.

The battle finally ended and the King and Queen returned. They had won the fight, and the vampires had fled...For now. They could tell that there would soon be another battle, and got everyone in Demonius to work on preparations.

When Lord Iablo was two years old, he had a baby brother, Lord Levi. The two were inseperable, even though Iablo showed dominance over his brother. Such was to be expected, since he was to become the new King of Demonius, and his father had been teaching him ever since he said his first word. I eventually noticed that Lord Levi had his own set of quirks; He really loved water and anything cold. If he didn't get ice cream or a (very rare) snow cone, he would cry until we gave in. He also found himself trying to sing, even though he didn't know how to talk. Music fascinated him, and he loved seeing the neon lights and the many instruments. Apparently he learned how to walk while watching a concert under my supervision. Needless to say I had to give the good news to his parents, and they found it amusing.

When Lord Iablo was three and Lord Levi just turned one, news came that we had another child in the family, another boy: Master Beel. I could sense that he was going to be a hassle from the start, and I was right. Beel would eat and chew on anything, be it a spoon or even his own hand. Feeding him took what seemed to be hours because he always wanted more, and he didn't turn anything down...Except cold food. Thankfully we had Lord Levi to take care of such matters.
Beel didn't take very long to learn how to crawl, especially since anything that seemed edible seemed to have encouraged him, and he was walking before he reached a year old. However, he didn't talk until he was about a year old, or almost two. Most of the time, he made noises to communicate, and while it seemed cute at first, it got to become a huge concern. When he finally said his first word, it was a surprise to us all...But the word he said wasn't a huge surprise: Food.

Eventually, Lord Iablo had to be taken off to learn more about how to rule the realm peacefully, and was able to have some independance. He was strangely mature for his age. I still kept an eye on him to make sure he didn't wander too far, and saw the strangest sight: He was talking to a vampire.
Apparently, this vampire was the future King of Vampirion: Maximillion Vamp, and he was learning the ways of ruling his own realm, just like Lord Iablo. The two seemed to get along, but to Lord Iablo's parents, Maximillion was a threat and he was to never communicate with him again.

When Lord Iablo was ten, another invasion occurred, and I was once again supposed to protect the King and Queen's children. The vampires were stronger than before, and I had to do more than ever to ensure the brothers' safety. I had to fight back.
Many vampires tried to swarm the castle, eventually breaking down every entrance and invading, and I knew I was outnumbered. But I had to protect Lord Iablo and his brothers at all costs.
I began to strike at them, and before I knew it, was knocked aside by an elite soldier of the vampiric army. But right when that happened, Lord Iablo fought the vampires and caused them to flee. If it weren't for him, they would've destroyed me...And I owed my life to him.

Finally, everything died down and I awaited the King and Queen's return. They never came back. Lord Iablo knew right away that they were defeated in battle, and I could sense his anger. He wanted to get revenge for his parents, but I knew it would only bring more harm than good.
Lord Iablo was about to give the order to prepare for an invasion of his own, but a familiar someone flew in. That someone...Was Lord Maximillion, the new King of Vampires. He said that he didn't want our realms to clash anymore, much to our surprise. He wanted our realms to forgive each other for all that's been done in the past, and to now live in peace. Lord Iablo could tell that his intentions were pure and agreed to the truce, soon becoming the new King of Demonius afterwards.

Ever since that day, I've remained to serve our Master, and will never forget how he defended me during that dreaded fight. I will never betray the family that took me in, and I am proud to have been here for the past 50,000 years. Lord Iablo is my all powerful king and the King of Demonius. What he says goes, and everyone must obey him. I'm proud to be his butler, even though his brothers always pick on me for always being by his side.

Beel is Lord Iablo's youngest brother, and is the Entity of Gluttony and Sloth. He really enjoys eating my food, and I'm happy to know that, but...He could at least learn how to eat with dignity.

Levi is Lord Iablo's second brother, and the middle oldest of the three. He's usually keeping to himself in his underwater realm, but that's fine with me. Otherwise, he's talking my ears off about those annoying boy bands...How can someone like that...Noise?

Scarsandre, or Scar as we also call him, is my twin brother. However, he and I are so different, it's hard to believe we're related! He enjoys to pull pranks, and as innocent as they may be, they become a huge burden very fast.

Vizzi, also known as Little D. Shapeshifter by officials, is our tour guide when I'm busy doing other things. He's a happy little guy and can change forms at will. He's also very helpful to both newcomers and returning veterans alike and knows a lot about our world.

Lord Maximillion, the King of Vampires. While he and Lord Iablo both rule their own worlds, they have a strong friendship. No one expected a demon and vampire to get along, and these two started the long-lasting truce between the two realms. 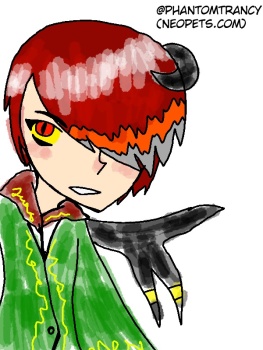