Well, well, you're a new sight! Have you come to fufill my QUEST?

No? Such a pity. I was giving out super wonderful rewards this time. But if they don't strike your fancy, then maybe you could do something else to entertain me.

The name is Lord Maximillion Vamp and I am the King of Vampires. This realm is inhabited by vampires and we can be quite the roudy bunch if you're not prepared.

But considering you're a vampire yourself, I'm sure you'll do fine. Now, go. Explore the world. But do return to fulfill a quest sometime. You wish to honor me? Aren't you loyal~ Yes, do what you can to amuse me. 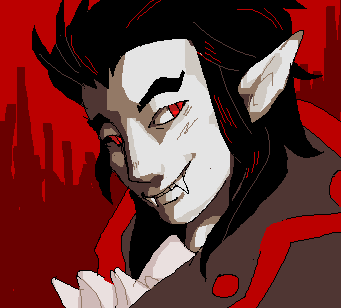 Others I have encountered

Ah, my loyal servants! Yes, they obeyed me faithfully, and never questioned my authority.

Grimmblade is my loyal butler. He has been with me since I was a child, and is not only skilled at tea preparations, but also in battle. He was once a fierce warlord, fighting under my family name for centuries, before retiring to become a butler. He still has some special techniques, however, so I wouldn't test him if I were you.

Senzo is a sorceress who can see into the future. She never shows her face, but her voice is somehow soothing, even when she says we'll be under attack. However, there's just something about her I can't figure out...

Lucifer Vamp, one of the most loyal vampires in the kingdom. Unfortunately, I haven't seen him in years because of a sudden disappearance, but I think about him from time to time. He was a worthy opponent but didn't stand a chance against my multiple weapons.

Salazar, Lucifer's brother. He never grew strong enough to fight me, but I could tell by watching him that he was a classy sort of guy. Heh, such techniques wouldn't work on me.

Lord Iablo is the King of Demons, and we share a peaceful, yet rivaled bond. While our kingdoms are at peace, we seek out soldiers and some end up joining the...Wrong team, if you get my drift.

I've met Levi and Beel a few times, but they mostly only greet me when I'm visiting Iablo. They're his younger brothers, and therefore rivals of mine in a way, but I enjoy the competition. I can tell that there are times they get on Iablo's nerves, though...Heh.

You are more than welcome to return if you so desire.