You have no idea how you came into this realm, only that it's filled with interesting creatures. The sky is full of pastel colors and the entire area is like a city amongst clouds.

You wander through a large building, passing by more strange beings, and despite the beautiful scenery, become filled with anxiety. This place was a little too beautiful somehow...

You enter a huge room, where some humanoid creatures greet you. They get close enough for you to notice that they're made out of felt and their faces are just button eyes with sewn on mouths, despite their very realistic figures. This causes you to panic and you run into another room, then stop at what you see.

A large throne sat in the middle of the room, covered in shadows. Long arms made from darkness can be seen from behind the throne, moving as if they were sewing something.

Ah, were you startled? a smooth voice speaks up, causing you to jump in alarm, My puppet servants were merely greeting you. They wanted to invite you for some tea. I'm afraid you've hurt their feelings by running away.

You watch nervously as someone stands up and notice that the arms are coming from his back. Long threads of wire can be seen wrapped around their thin fingers and you notice that there's another puppet being held by this being, seemingly in a peaceful slumber in his arms.

The being turns toward you and you grow tense as he flashes a tiny smile, revealing long, jagged fangs, then raises his head and gazes at you with glowing, red eyes. You notice that half his face resembles a skull and shudder.

You see, my puppets only want to treat my guests. the being says, They enjoy having tea and other delicious snacks...But when someone runs from them, it's like being rejected, and it hurts. Oh, does it hurt.

The being walks toward you and you switch back to the rather horrifying puppet in his hands, being stroked gently by his clawed fingers. The being reveals his fangs again and says some chilling words:

And I don't appreciate them being hurt. After all, I created them. And hurting them...Hurts me.

The being takes you up to a table, on which sat a few cups of warm tea. He gestures for you to take a seat, to which you quickly sit down.

So you're new to this world? he asks, waving one hand in the air, I can see why you're so scared...The realm of Terror Beasts is quite dangerous, even if it has quite the beautiful scenery.

The teacup floats into your hands and you take a light sip. Strangely, the tea is super delicious and you begin to feel calm again.

Heh, do you like it? It's my special blend. the being smiles at you again, but this time, in a more friendly manner, I added just enough sweetness to not overpower it, and a secret ingredient that only my servants can get me.

You nod and take another drink, then ask the being some questions about himself, noting everything down as he answers.

Name: TB: Beginning; Code name: Zatamune
Alias: Zata, The Gentleman, The Puppetmaster, The Creator
Race: Human/Terror Beast hybrid
Likes: Fancy suits, puppets, creating new puppets, his brother: Matazume, travelling the world, seeing cheerful faces, dark magic, tea, classical music (especially involving the violin)
Dislikes: His puppets being torn or broken, his brother's violent temper, being referred to as a monster, people running from him or his servants
Traits: Normally seen in a suit and top hat; Has what seems to be part of a skull on one side of his face (it's unknown if it's a real skull or if it's just face paint). Can grow multiple shady limbs from his back. Always has his Matazume puppet nearby; It's his favorite puppet as it symbolizes his brother. His alternate, "true" face has a monocle on one side and long, jagged teeth. He is also a vampire.
Personality: Mysterious, gentleman at first glance, two-faced, calm, soothing yet intimidating, entrancing
Powers: Can create puppets out of anything he touches, shadow magic, reading the future, travelling through dimensions Brother, I promise I'll find you. I can tell...That you've dealt with a lot of pain.

You have served me well, my loyal henchman. Because of you, my tea has never been better.

You had no idea that you, too, are merely a puppet for my own plans! I'm the one who gave you such great power!

This is the "Mighty Hunter"? How amusing! They're both just poorly designed puppets!

Legend, you say? Heh, well I suppose I could be called that...But, I don't think I've ever seen you before.


Ah, such an interesting creature~

Truly a sight to behold.

Old design (don't use these as reference): New design (use these instead): 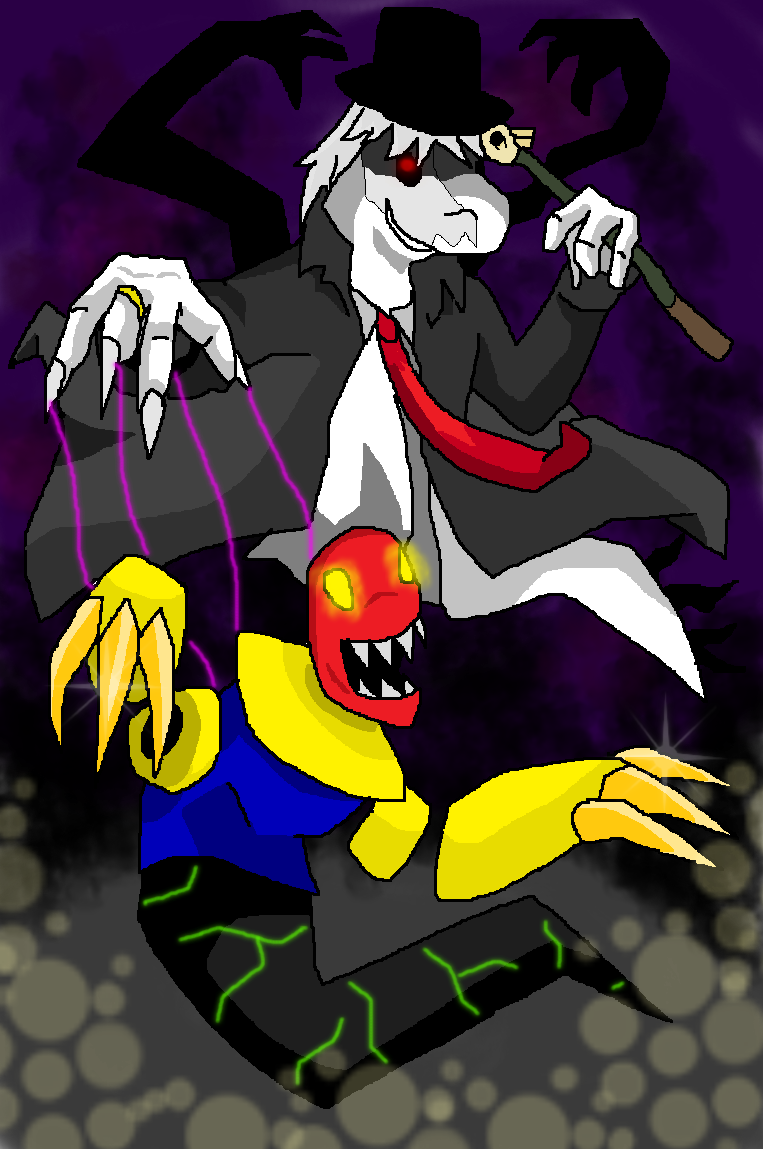 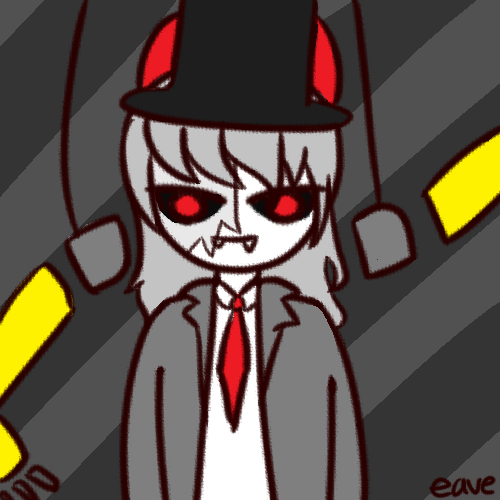