You wander through a huge, dimly lit room. People are passing through and you try to avoid running into anyone.

You hear people talking, and overhear someone say something very interesting:
Have you heard? The Dance King is back! They're challenging people to a danceoff!

This made you curious. You've heard rumors of a "Mysterious Dance King", but never saw them in person.

You quickly make way to a stage, of which is lit up and surrounded by a large crowd. Loud cheering can be heard as the sounds of catchy music begin to fill the air.

There! There's the Dance King!

You make your way through the crowd and catch sight of a tall humanoid strutting onto the stage with arms outstretched and a huge grin on their face. Their long, brown hair flows as they strike a few poses for onlooking fans and their nails shine in the bright light.

Who's ready to DANCE? they boom, to which the crowd applauds and cheers even louder than before.

You look around and notice someone else approaching the stage, an eager look in his eyes. He then announces, I challenge you to a danceoff!

The Dance King gazes down at him and smirks, then motions with a finger to come onstage, to which he does and stands beside them.

My first challenger. Shall we show the crowd a good show?

The young man looks forword as the stage forms into a large game. You knew this kind of game; It was a dance game that involved super catchy music and distracting graphics to confuse the players.

Before anyone can react, music fills the area, and brightly colored arrows form on the wall in front of everyone. The dance begins.

The young man and Dance King both start off brilliantly, but soon, you realize, that only one will truly survive...And it wasn't the challenger.

The arrows move faster, and the young man struggles to keep up while the Dance King effortlessly nails every move, striking poses as they went.

Suddenly, the challenger starts to make a move, and slips on the floor, falling onto his behind.
The Dance King continues until the song ends, then turns toward him and blows onto thier nails before saying, Good try.

The crowd screams with joy as the challenger is helped up before he leaves the stage, an awkward grin on his face.

They can do anything.

You watch as the Dance King waves to the crowd before starting another song, this time for themself to entertain everyone, and can't help but wonder how they manage to dance the way they do.

That's why they're the King.

Name: TB #700; Code name: Cyber (former); Mekai (current)
Alias: The Mysterious Dance King
Gender: Demi-Male (he/him or they/them)
Race: Terror Beast
Likes: Freedom, finding new worlds, keeping away from Zata and his army, wooing people with their dance abilities, fluffy things
Dislikes: Being restrained, Zata calling them a puppet, being referred to as an "it" (do this and they'll unleash their rage!)
Traits: Has long brown hair that covers their eyes; Only a fang-filled mouth can be seen. Is normally seen in some sort of mysterious suits and with armor similar to a top hat on their head. Has long claws and high-heeled boots with spikes in the back. Scarf arms can act as extra limbs, especially while dancing.
Personality: Fun-loving, enjoys dancing, loud, sometimes obnoxious, mysterious, sly, charismatic
Powers: Teleporation, super speed, can create extra limbs out of scarf arms and shadows, able to corrupt small pieces of data, can beat anyone at dance games You may have created me, but I refuse to bow before you after what you've done! Old vs new (colors were decided in 2021 as I never colored his old design): Others have really enjoyed watching me dance! 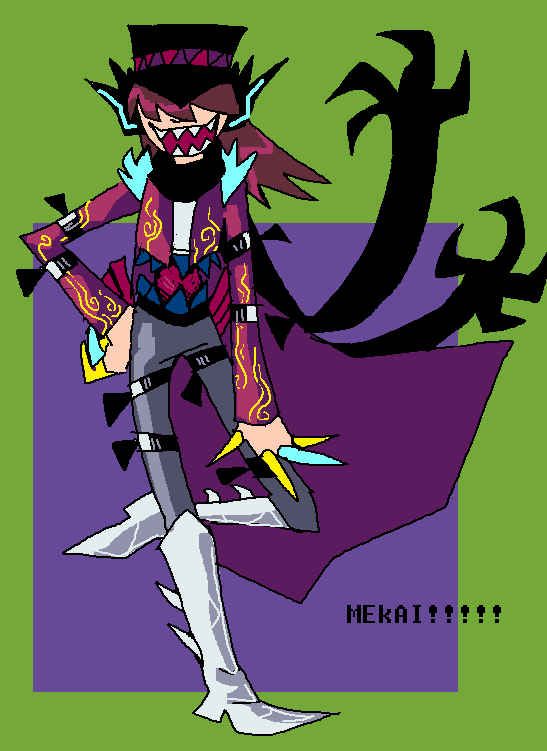 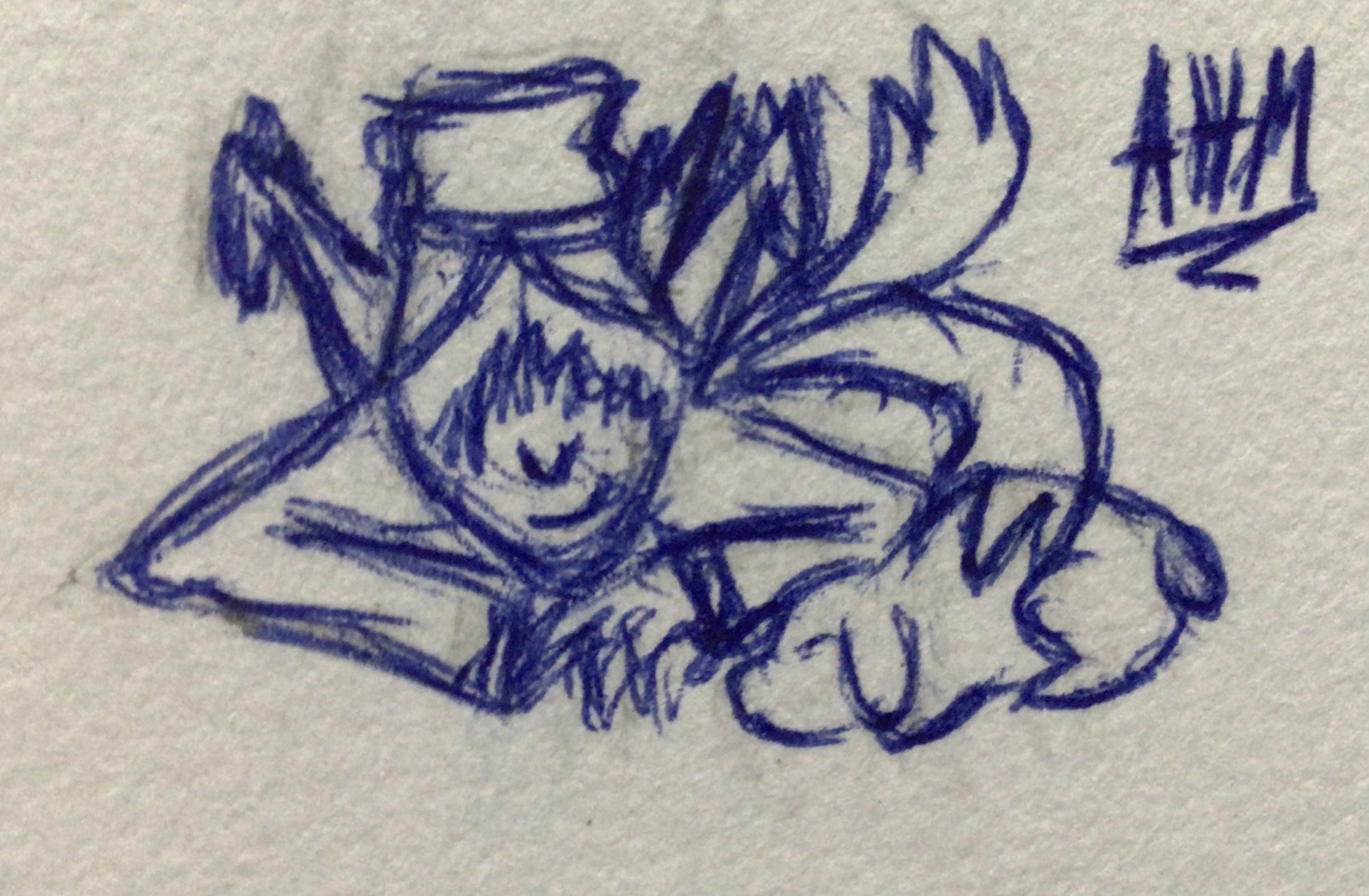